Critical mid-term resistance is clearly within sight for XRP/USD technical traders this morning as the broad cryptocurrency market remains stable.

XRP/USD is battling important mid-term resistance in early trading. However, Ripple has actually been traversing its current values for the past week of trading, and the consolidation is likely drawing the attention of speculators as they anticipate potential breakouts. The broad cryptocurrency market has been remarkably tranquil too and traders may want to also note that there is a holiday in the US today, which may affect volumes short term.

XRP/USD has enjoyed a solid bullish run and its ability to climb to its current price range which is near the 1.32700 vicinity as of this writing appears to be additional positive evidence that trading sentiment is bullish. While speculative bears may believe XRP/USD and other cryptos are approaching overbought territory, history shows that it can be a costly endeavor trying to fight the overwhelming trend.

Interestingly, XRP/USD is certainly approaching May thresholds, but Ripple does remain under a rather massive price range that was traded with a robust amount of energy from the 26th of April until the 19th of May. During this time period XRP/USD was able to see a substantial amount of its trading between 1.31000 and 1.69000. Technical traders should also note that this higher price range which is seeing its ‘lows’ tested now was not the highest value band for XRP/USD seen this year. For a few days during the second week of April, XRP/USD did come within sight of the 2.00000 mark.

The high price for 2021 should also be understood as an apex for Ripple’s price the past year, but not its all-time high which was achieved in late December of 2017 when XRP/USD touched the 3.30000 ratio briefly. Technical traders who are considering stepping into buying positions at the current levels may be making a solid logical decision. Conservative traders may want to see slight reversals lower. Support for XRP/USD has looks adequate near the 1.30000 to 1.27000 ratios short term.

XRP/USD has found a positive trend the past six weeks and its ability to traverse near important mid-term resistance and consolidate is enticing. Volatility can hit Ripple like all other cryptocurrencies and traders need to be vigilant and use their risk taking tactics wisely. Buying XRP/USD and looking for upside momentum in the near term appears to be a potentially worthwhile wager. 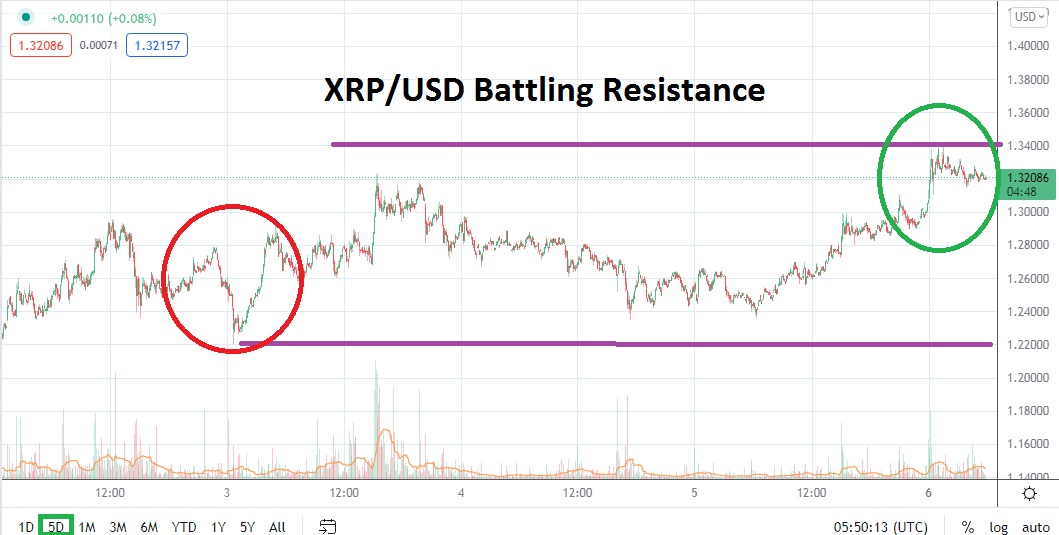